Had a debate recently about OKC where people have been scapegoating multiple people for the shit show the team has become. Hasn’t it always been a shit show? No? Lets examine what’s happened here recently. We can call it the curse of fucking over the fans of a 40 year franchise.

1. Clay Bennet bought the team from Howard Schultz on the condition he wouldn’t move the team. Immediately fucked over fans with losing moves to lose as much as possible while keeping KD to drop attendance. Then demands they build him a new stadium to fake them needing to move while they steal KD away with the team. Caught detailing this plan in emails before buying the team. Blatant fraud.

2. Get Westbrook. He sure doesn’t look like a legitimate PG. Tells everyone he wants to be and give him time to learn. People believe him so:

3. Pass on Curry and the prospect of having a KD/Curry shooting team. (irony right?) Westbrook shoots them out of first round series where they had LAL on the ropes. Westbrook is clearly not a PG but still claims he wants time to learn. Looking for the shit show flusher so…

4. Westbrook being Westbrook becomes a thing as he basically sulks around the court unless he’s given carte blanch to shoot as much as he wants. So he shoots them out of WCFs vs Dallas and totally exposing himself. Totally chokes anything but hero ball out of his game under pressure… WB being WB exposed as a fraudulent concept. Scotty Brooks near 100% isolation Dribble Drive Motion offence facilitates a PG who wants to continuously get stats playing YMCA basketball. Totally picked apart by Rick Carslile. Well we know what to do right?

5. Sign Westbrook to an extension a year early using up all the cap space when Harden and Ibaka are both coming up.

5. Proceed to let Scotty Brooks screw around with an entire offence. Manage to actually make the finals going through SAS when they flat out tell Westbrook to stop shooting and bench him for long stretches. What a fluke gimme for skipping on the GOAT shooter Stephen Curry. It looks like KD and Harden are going to be winning a bunch of titles the way they combined to totally outplay Pop and one of the best Spurs teams ever. Whoops. Westbrook shoots 13% from 3 in the finals and 20% from the field in the close out game losing 4 straight. Well I guess we know what to do here:

6. Yup. Trade James Harden who wants to stay. With a full year left on his rookie deal. And is a budding superstar as he proved himself vs SAS. Better make more room for jacked shots.  Don’t worry. They got back Jeremy Lamb and a rental of Kevin Martin who doesn’t fit at all cuz he’s never getting touches either. Harden was leading the league in scoring a few months later. We can call this the point the world started to notice the smell.

Lets not pretend that we didn’t know who James Harden was too.

7. Have another season. It’s obvious KD is the best player. It’s obvious WB is not interested in any way in deferring to him and is shockingly taking more shots than KD now. WB plays 2 games in the playoffs. KD is able to still beat Harden and the rockets by himself. Lets remember that for later.

8. Westbrook gets seriously hurt and has to miss a bunch of games. Without him in the way KD goes on one of the greatest runs a player has ever had dropping 35/8/6 on 53% and 40%. Take a few games to adjust but they end the span going 15-2 as the league’s hottest team. WB comes back early and the perfect play stops. They start losing again.

9. They lose to the Spurs with WB shooting 40% and 28% from 3 taking one more attempt than KD in the series.

10. Next season it’s KD’s turn getting hurt. Westbrook, instead of using the opportunity to carry his team and make everyone better like KD did, uses it to pad his stats dropping insane usage and get as many triple doubles as he can. The media freaks out but they’re barely above 500 and miss the playoffs losing a TON of winable games. 4th quarter gag jobs are excused by putting down the talent around Russ without KD there.

11. OKC has everyone back healthy again. It wasn’t Scotty Brooks that was the problem. Billy Donovan can’t change how the point is played either. There is a clear cold war going on at the top of the team. KD and WB are best friends but they’re struggling because WB wants to ball hog and KD wants to win. They lose countless close games with WB just being out of control at the end of the fourth in seemingly every game and trying to prove he’s KD. He’s not KD.

12. It comes to a head vs GSW. They have them on the ropes up 3-1 but they can’t beat great teams unless KD is perfect. WB shoots over 45% only twice in the last two series but shoots under 40% 8 times. KD tries to dominate the ball out of his hands so they don’t get shot out again by him and he ends up missing some in a crucial game. The beast we know as David Icco is born.

13. KD takes a hard look at his career. He realizes that the OKC team just isn’t going to work and has to make a hard choice between his own career and his friend. OKC has sacrificed everything they’ve ever and their future to make Westbrook happy. KD likely realizes that he’s also guilty as an enabler. He chooses to leave to go to a real team and leave the same shitty offence that’s been built to stop Westbrook from sulking for good.

14. KD goes and gets hurt during what was a clear MVP season. WB is all pretend pissed blaming everyone but himself for his problems and is out to prove himself. He tries to prove himself by laying it on twice as thick and refusing to admit there’s any flaws in his game. He dominates the ball and produces an epic clip of empty stats to drive triple doubles. His teammates aren’t allowed to rebound misses if Russ can potentially get them because this season is all about Russ proving that KD shouldn’t have left cuz Russ is what… super awesome?

15. This means the new talent on his team they got for KD totally regresses. Enes Kanter is disengaged on both ends. Oladipo looks mediocre. Sabonis looks like a scrub. Adams looks like he regressed. Everyone is standing around watching WB play 1 on 5. They’d better make those spot up jumpers because those are his assists. OKC fans and media pretend that his teammates suck.

16. Russ steals an undeserved MVP won on empty stats he basically cheated to obtain. He’s totally exposed in the first round barely managing to win 1 game vs Houston. (Irony again. OKC led by Westbrook barely puts up a fight)

17. KD wins FMVP with Curry, the combo that OKC wasn’t interested in years ago cuz they wanted to keep the guy who dunks and yells a lot but lacks skills.

18. OKC works some magic and manages to trade the aforementioned scrub teammates who could only win if WB hogged the ball to get back 2 all star teammates. Aforementioned scrub teammates all do freaking really well in MIP campaigns. Oladipo plays like an allstar. Sabonis drops double doubles nightly while shooting 54% adn 44% from 3. Kanter drops 14/10 while actually looking engaged playing great D.

19. Melo and PG13 look lost playing with WB. WB tries to play with them but is just clueless how to play at a high level if it doesn’t involve him trying to force low percentage shots. Everyone is shooting career lows. They’re still 3 games under 500. And they just got their asses kicked by the Orlando Magic where for the first time I’ve ever seen WB stared blankly and I would hope maybe consider that maybe, just maybe, his shit selfish attitude is the problem.

At the time of this writing the Thunder have gone 9-3 (with 2 losses by only 3 points) when Westbrook has taken 5 or less 3 pointers. They are 1-9 when he’s taken 6 or more. And now people are trying to blame Melo and Paul George as if they’re cancers for a team that’s had a single solitary problem for nearly a decade. 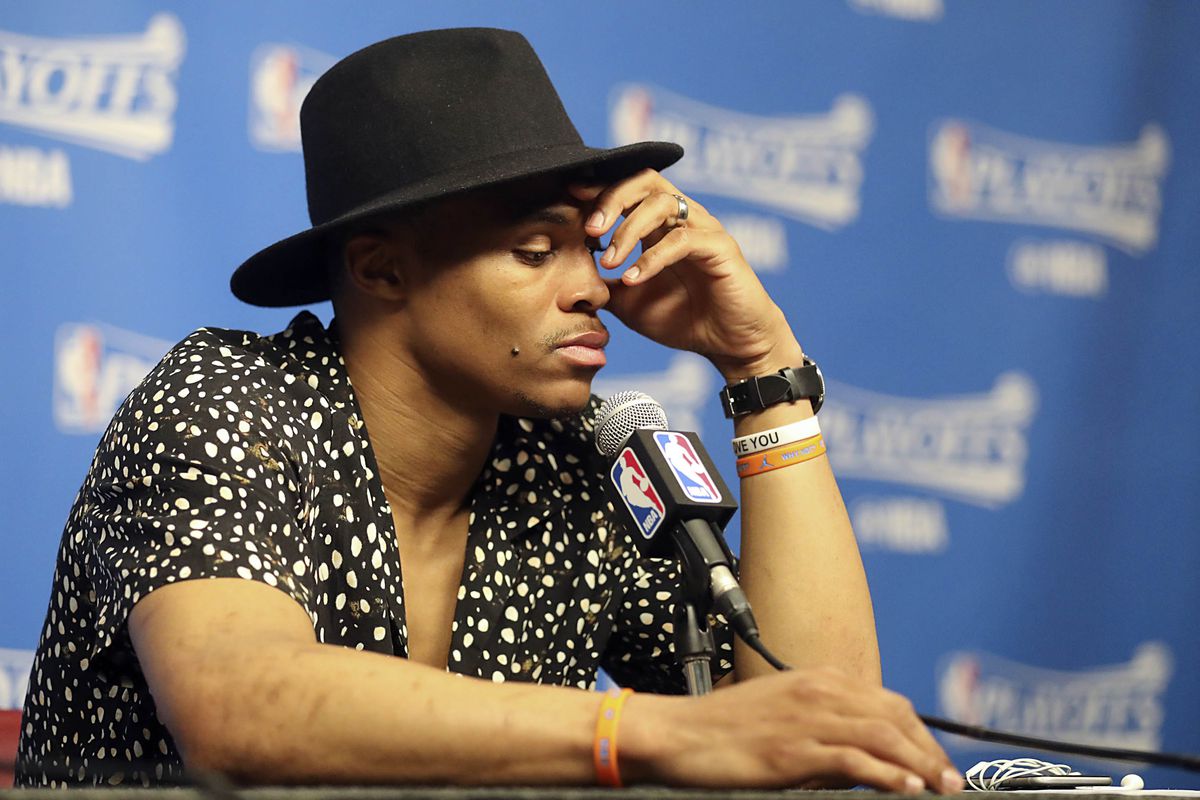